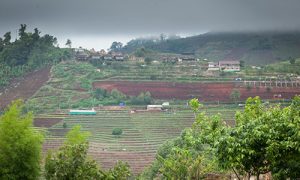 Chiang Mai (Thailand) – October 5, 2016 – (travelindex.com) – If you’ve ever trekked in the forests of Northern Thailand and occasionally looked out over a vista of tree-covered slopes, stretching to the horizon, you may have presumed that this region has been relatively untouched until modern times – the primeval realm of Mother Nature. But the truth is that these hills have long been home to a wide array of tribal people – half a million in number, living off the land, cultivating crops in small holdings and doggedly preserving their unique customs and cultures.

These hill-tribes are thought to have migrated from China and the Tibetan Plateau over the last few centuries to settle in Myanmar, Lao PDR. and Thailand. Now they make up six major groups – the Akha, Lahu, Karen, Hmong or Miao, Mien or Yao, and Lisu; each with a distinct language and culture of their own. Until recent years, these hill-tribes led a pastoral life raising animals and growing crops, including small amounts of medicinal opium. But as the modern world intruded, and the Vietnam War gathered pace in the 1960s, modern communications exposed the hill-tribe communities to a more unscrupulous outside world and opium became a cash crop with all the misery that entails.

So the Nong Hoi Royal Project Development Centre, Chiang Mai in Mae Rim sub-district was set up in 1984 by His Majesty King Bhumibol Adulyadej to help the tribal people in the region to move on from the production of opium while improving their lives and the reputation of the country. The Project has been a resounding success – new farming methods, training and equipment, brought in by experts, have meant sustainable and saleable crops are now grown on slopes once reserved for opium poppies.

Much of this success is due to the fact that the region in which the tribal people live, lies between 850 and 1,460 metres above sea level and has a mean temperature of 21 degrees Celsius, perfect for growing a range of crops that can’t be cultivated on the hotter plains of Central Thailand. These fruits and vegetables include artichokes, lemon thyme, mint, camomile, rosemary, plums, seedless grapes, strawberries, red olives, herbal teas and tomatoes – many of these fresh ingredients are sent directly to Chiang Mai’s restaurants and hotels, which seek out sustainable and high-quality food sources.

Because this is such a lovely area, coupled with the unique local lifestyles, Nong Hoi has become a tourist attraction in itself. In the fresh clean air of the hills, there are amazing walks to enjoy, stunning views and the chance to learn about sustainable development. Book a visit in advance, and a specially-assigned staff will give your group a briefing on the Project’s background, and you’ll get to taste some of the fresh goods and herbal teas which grow all around.

Perhaps the most important building at Nong Hoi is the Royal Project Crops Development Centre, where experiments are carried out in an effort to increase the types of temperate climate fruit and vegetables that can be grown by local hill-tribe farmers. Government scientists and students often come here to conduct research, but visitors can also stop by to have a look, and there are some fascinating demonstrations of organic and hydroponic growing techniques for herbs and vegetables.

Respect One Another in the Country, St Ange Tourism Report