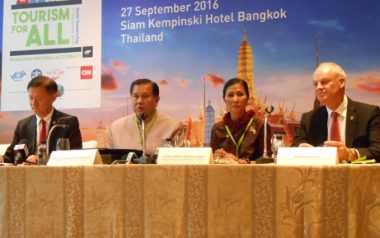 The event, which celebrates its 36th consecutive year since its launch in 1980, is an initiative of the World Tourism Organization (UNWTO), the United Nations agency that promotes accessible, sustainable and responsible tourism.

This year’s theme, ‘Tourism for All – Promoting Universal Accessibility’, proved especially poignant given current events that have impacted global travel this year. The day intends to foster understanding and increase awareness of the social, cultural, political and economic value of travel between individual nations and highlight tourism’s role as a global growth engine for the world’s economy.

Thailand’s Prime Minister and Chairman of the Ceremony, H.E. General Prayut Chan-o-cha, delivered the keynote address of “Tourism for All in the Global Context”. His presence at the event signified the importance the government places on Thailand’s tourism sector, and the key role it plays in the country’s economic development, as he pledged to make Thailand ASEAN’s leading destination for “Universal Accessibility.”

H.E. Prime Minister General Prayut Chan-o-cha said, “In the name of Thailand and the Thai people, I thank all of you who have contributed to this import work for humanity. I especially thank Dr. Taleb Rifai, Secretary-General of the United Nations World Tourism Organization, and his team for choosing Thailand to host the meeting and celebration of ‘World Tourism Day 2016’.

“Thailand aims to develop into an ideal ‘accessible tourism’ country while preserving the invaluable history and architecture of the nation. To turn vision into reality, the government will transform Thailand into the Hub of Universal Design in ASEAN.

“In achieving this aim, it will need concerted collaboration from the public sector, the private sector, community networks, civil society, policy makers and tourism stakeholders. This will definitely inspire member countries to cooperate and give the world population real access to tourism based on true equity and justice,” he added.

H.E. Mrs. Kobkarn Wattanavrangkul, Thailand’s Minister of Tourism and Sports said, “Tourism for All is a concept we have been talking about for a long time with the Tourism Authority of Thailand. It is the duty of the government to create ‘routes’ that cater to the disabled and special need travellers from the time they arrive in Thailand, from hotels to our many attractions until they return home.

“We are working on tourism routes in each of Thailand’s eight major regions, ideally with one or two per region when completed, that are accessible to all travelers regardless of needs. Work has already begun on the first route in Khon Kaen in Thailand’s I-san region and will serve as a blueprint for future development.

“Hosting ‘World Tourism Day 2016’ has given Thailand a much greater understanding of ‘Universal Accessibility’, not just for handicapped individuals but also elderly travellers and others with special needs. Now we have the budget and are turning the idea into reality, as this expands it will really happen with cooperation of local communities. It is another great example of the UN taking action and leading by example.”

According to Mr. Xu Jing, UNWTO Director Regional Programme for Asia and the Pacific, over 500 participants from around the world attended World Tourism Day 2016 in Bangkok, declaring it one of the most successful in the event’s 36-year history.

He said, “Thailand is Asia’s ‘founding father’ and the region’s leading destination that welcomed over 30 million tourists during 2015.

We are here today to celebrate the importance of tourism and development of ‘Universal Accessibility for All. The personal presence of Prime Minister General Prayut Chan-o-cha and Deputy Prime Minister General Tanasak Patimapragorn demonstrates Thailand’s commitment to become a global leader in accessible tourism.

It’s support for the ‘Tourism for All’ concept proves its viability as a guideline for future sustainable tourism development for all countries around the world.

Discover Asia with Best Western, Stay Two Nights and Get One Free

The World’s Most Accurate Mechanical Watch Unveiled by Zenith