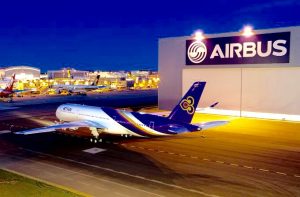 Bangkok (Thailand) – July 26, 2016 (travelindex.com) – Two aircraft are undertaking final flight tests for delivery in 3Q 2016. Painting of the first A350 XWB (Xtra-Wide-Body) for Thai Airways International (THAI) was completed back in April, the aircraft then moved from the Airbus paint shop in Toulouse, France, to the next stage of production – the installation of engines and cabin furnishing. The aircraft has now entered flight testing. The twin jet has completed its maiden sortie at Toulouse. The aircraft will be delivered to Thai Airways International (THAI) in August and September 2016.

Modernising it’s fleet and bringing new levels of efficiency and comfort in the long range market, the A350 XWB will be especially well suited to the needs of THAI. Firm orders for the new aircraft already total 241 in Asia, representing over a third of total sales for the A350 XWB to date.

The A350 XWB is the world’s latest generation airliner and the newest member of Airbus’ wide-body product family. Weight-saving carbon fibre fuselage and wings, plus new fuel-efficient Rolls Royce Trent XWB engines result in a 25 per cent reduction in fuel burn and emissions, and significantly lower maintenance costs. Thai Airways, has four of the type on order. It is also taking another eight on lease. The aircraft will be fitted with 321 seats in two classes.

The two A350 XWBs are among 12 aircraft ordered by the Thai flag carrier with the rest being delivered next year.

The first two aircraft, each with a price list of US$355.7m, are designed to operate long-haul flights and will be used between Bangkok and Melbourne, Australia.

THAI is boosting efforts to reduce losses and turn the company around. Its president, Charamporn Jotikasthira, said the planes would help maintain the airline’s quality standards and provide passengers with more convenience.

According to Airbus, a total of 3.5 billion flights were offered in the region last year, with the number expected to double in 15 years time.

Airbus market the A350 XWB as having a spacious cabin with larger windows and overhead compartments that are designed to handle more luggage. Every seat is equipped with a 16-inch multi-touch screen for entertainment and passengers can connect WiFi to their electronic devices.

Also according to Airbus’ website, the A350 XWB offers more personal space and 18-inch wide seats as standard in economy. The model can also perform flights of up to 19 hours.

Makes Your Dreams Come True in Tokyo with Best Western

Grab your Special Privileges Offered by TAT at Website, New Shade of Luxe