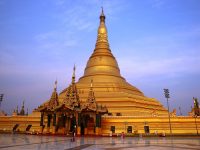 Naypyidaw (Myanmar) – July 15, 2016 (travelindex.com) – In November 2015, Myanmar had held a successful national election, which was a significant milestone towards a transparent and stable government. Since the economic isolation and political instability has been emerging in Myanmar for decades, indeed, the easing of U.S. sanctions in May 2016 occurred the relatively smooth transition of power to the Democratic Party and ensured that Myanmar is ready for a foreign investment takeoff.

Consequently, Myanmar is now striving for a massive economic growth by opening their country to foreign investors in various investment sectors as well as introducing the Yangon Stock Exchange (YSX).

Foreign Investment Opportunities
Myanmar has a great potential for broad economic expansion due to a richness of nature with a spotted location at the crossroads of Southeast Asia, a young population, and a sizable market with wide-ranging investment opportunities.

According to the latest update provided by the Directorate of Investment and Company Administration (hereinafter “DICA”), a wide and growing range of investment and potential opportunities is now offered to foreigners in the following sectors:

– Agriculture: The DICA is aiming to attract foreign investors for helping them by transforming the traditional agricultural economy into a productive and sustainable agro-economy (e.g. irrigation, seeds quality and techniques, post-harvest processing).
Aquaculture and Fisheries: Recently, the exports of fishery products from Myanmar have received an approval from the European Union to export fishery products by certified producers. Hence, the foreign investors, as a joint venture with a local enterprise, are entitled to receive preferential tariff arrangements with the European Union.

– Urbanization: The urban growth in Myanmar has been stimulating a demand in the market in order to have more products and better services. According to a gradual migration of Myanmar’s population towards major cities, such as Mandalay and Yangon, foreign investment and skilled workers are needed in real estate and construction sectors.

– Tourism and Hospitality: According to the Ministry of Hotels and Tourism and the Ministry of Immigration and Population, the country is currently experimenting an exponential increase in terms of tourist arrivals since 2010. The latest tourist numbers in year 2014-2015 were 3.5 Million visitors, which give many opportunities to foreign investors in order to invest and develop from 3-star hotels to high-end luxury resorts along the coastline.

Furthermore, with an additional effort to boost up the tourism industry, a new visa regulation is currently in a discussion process with the ASEAN to allow foreigners to visit the ASEAN region with a single visa.

Sustained Economic Growth
Despite several flooding, landslides and political shifting, Myanmar’s economy continues to perform in a previous closing fiscal year and is forecast to accelerate during 2016-2017, particularly in the agriculture and tourism sectors. Furthermore, foreign direct investment (FDI) are also predicted to increase gradually due to the recent opening of the YSX as well as additional incentives for foreign investors after the U.S. Government lifted some economic sanctions against Myanmar. The Securities and Exchange Commission of Myanmar recently announced that they are planning to allow foreign investors to access the YSX as well as local-foreign joint ventures to list on the emerging platform.

A successful stock exchange would be the first step for developing a strong and viable capital markets. Additionally, it could persuade the middle class and high net worth individuals to move away and step outside their boundary and their traditional investment assets, such as real estate and gold that they have usually favored to the detriment of a volatile stock market aiming towards a more dynamic forms of investment.

Upon lifting of economic sanctions by the U.S. Government, the economy has been bolstered by a flood of FDI and is expected to grow robustly in the coming years. Based on the economic growth rates of the DICA, in comparison with 2015, it illustrates that the approved foreign investment has been increased 18.4% with the amount of investment money $9.48 Billion in 2016. Myanmar is forecasted by the McKinsey Global Institute to attract as much as $100 billion in FDI by 2030 if it spends enough to achieve its full economic growth potential.

According to the Asian Development Bank (ADB), the 2016 Outlook is predicting a tremendous economic growth for the upcoming years. The growth of Myanmar in 2015, with 7.2%, was slightly above the average comparing with the others Asian countries, and the economic forecast of the ADB is foreseeing a growth of 8.4% for the fiscal year 2016, which is one of the highest rate throughout Asia.

About Harvey Law Group:
Harvey Law Group (“HLG”) has been a pioneer in the Corporate Immigration and Business Law sectors since its beginnings in 1992. HLG has maintained a strong presence throughout Asia and has always been foreseeing emerging markets such as Myanmar. With its recent election, opening of the financial market to foreigners and a significant Law Reform, HLG recently open its first office in Myanmar and is looking forward to provide high-end and worldwide services to the population.