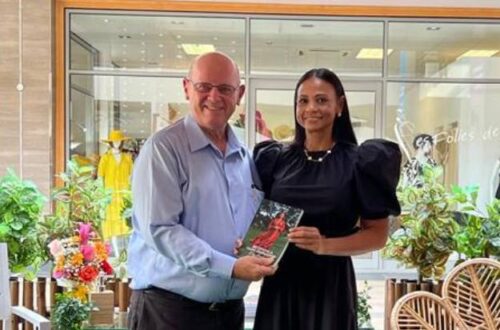 Eden Island, Seychelles, August 31, 2021 / TRAVELINDEX / Marsha Parcou, the Seychelles former tourism representative in South Africa and in the UK for many years, has published her book that touches on her work and experiences as the island girl who became the face of her island home.

It was Alain St.Ange, the Seychelles former Minister of Tourism, Civil Aviation, Ports & Marine who had the honour to launch the book at Eden Island in the Seychelles. Mr. St. Ange said as he launched the book “Becoming A Fanm Fasinasyon – My Journey” by Marsha Parcou that the experiences collected over the years as a tourism leader should ever be allowed to be forgotten. The friends made and the press contacts developed can only remain alive through publications such as in One’s Journey through life.

Marsha Parcou who now owns and manages her own “Chatter Box” Café and Restaurant has also developed courses she leads to inspire others and many who have followed her courses were on hand at the book launch to recount their own appreciation of sitting through training sessions by Marsha Parcou who was based in Johannesburg in South Africa and in London in the UK as the Seychelles Tourism Office Manager.

From the Swiss Alps to the Andaman Sea