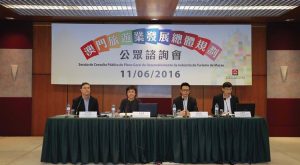 The 12th Five-Year Plan has clearly stated the Central Government’s support for Macao to position itself as a World Centre of Tourism and Leisure along its future development, and the positioning was further confirmed in the 13th Five-Year Plan. In early 2015, MGTO invited public tenders for the “Macao Tourism Industry Development Master Plan Service Provision”, to propose an integrated scheme for Macao’s tourism development in the short, medium and long run. The ultimate objective is to formulate a comprehensive Master Plan for the development of Macao’s tourism industry and lay a key foundation and direction for its future development in the next 15 years.

The “Macao Tourism Industry Development Master Plan” will analyze the current situation of Macao’s tourism industry on a variety of aspects including city competitiveness, tourism resources and products, tourism source markets and target segments, tourism branding and city positioning, innovative technology and smart tourism, tourism quality and service, regional tourism cooperation, city development, transportation and accessibility. Based on detailed analysis on the above aspects, the Consultation Paper proposes 4 overall goals of the Master Plan and 14 strategies along with various measures to carry out in the short, medium and long term, in line with the goals set in the “Draft of the Macao SAR’s Five-Year Development Plan” (2016-2020) as guiding principles. The Master Plan serves the aim to promote sustainable tourism development in Macao and realize the city’s vision in the tourism field as it strives to become a World Centre of Tourism and Leisure.

The tasks involved in the Master Plan are proceeding along three stages. At the first stage, data was first collected followed by an analysis made on the current tourism situation, and a preliminary draft of the Master Plan was prepared by November 2015. Second-stage tasks mainly comprise launch of public consultation and formulation of a detailed Master Plan, expected to be completed this September; third-stage tasks will then begin at the third quarter of 2016 to amend and complete the final Master Plan, which is expected to come out in mid-2017.

SureStay Franchise of Best Western to Surge in 2017