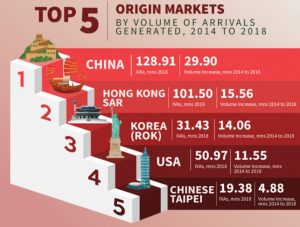 Bangkok (Thailand) – May 23, 2019 (travelindex.com) – According to the Pacific Asia Travel Association (PATA) Annual Tourism Monitor 2019 Early Edition, Asia Pacific destinations collectively received almost 700 million international visitor arrivals (IVAs) in 2018. However, while tracking the shifts in destination growth is one dynamic, it is also of value to couple this approach with monitoring changes in the origin markets structure and how they themselves may be driving change. Myanmar for example tops the annual growth chart for its visitors flocking into Lao PDR in 2018 with a year-on-year growth rate of 677%.

From an origin region perspective for example, it is evident that the proportion of arrivals into Asia Pacific destinations has, at the aggregate level at least, been continuously favouring Asia between 2014 and 2018, generally at the expense of the other origin regions.

For a number of years now, arrivals out of Asia have been generating more than 60% of all arrivals into and across Asia Pacific, with that figure now oscillating between 63% and 64% over the last three years to 2018.

Out of Asia specifically, it is Northeast Asia that is fuelling the current momentum, with almost three-quarters of arrivals out of Asia into Asia Pacific in 2018, originating from within that sub-region.

Furthermore, that proportion has remained relatively steady since 2014, deviating by a little over 1.4 percentage points from peak to trough, over that period. Southeast Asia also generates a significant volume of arrivals into Asia Pacific destinations each year, adding to the dominance of East Asia, which supplied almost 90% of the visitor arrivals into and across Asia Pacific in 2018.

The Pacific differs in this regard however, as Asia and the Americas dominate arrivals into that region, together accounting for almost 70% of visitors in 2018. Intra-regional travel (i.e. Pacific to Pacific), is now a little over 18% of total arrivals.

At the origin market level, given the strength of the Asia flows across Asia Pacific, it is perhaps not surprising to see China and Hong Kong SAR leading the top five list of origin markets by the volume of arrivals they each generated into Asia Pacific in 2018.

It needs to be remembered however that these are visitor flows, not tourists, so by definition they include day-trippers in these counts. This is particularly relevant for some of the cross-border flows between each of Mainland China, Hong Kong SAR and Macao, China. The impact of these day-trippers can not only be significant, they are also growing in number each year, and for those reasons, must be taken into account.

The flows out of North America are also significant, however Northeast Asia clearly dominates that particular metric in 2018.

A similar – but not exact – picture is also apparent for the strongest increases in the absolute volume of IVAs generated by individual source markets between 2017 and 2018, with China and Hong Kong SAR once again heading the rankings.

While Northeast Asia dominates that particular list, the Americas appears twice, although with Mexico replacing Canada.

These top five origin markets together, delivered close to 28.2 million additional IVAs into Asia Pacific destinations in 2018 and accounted for more than 55% of the net increase in arrivals between 2017 and 2018.

In addition, there were some very strong annual growth rates in 2018 as well, mostly from origin markets that in many cases are not yet regarded as mainstream. Poland is perhaps the stand-out source market as it combines a reasonable volume base with an annual growth rate of 72%. All of these origin markets however, had growth rates in excess of 50% between 2017 and 2018 and warrant monitoring to determine whether or not a trend is emerging and if so, into what destinations.

Over the longer-term between 2014 and 2018, it is once again, given the strong IVA flows generated by Northeast Asia, no surprise to see that four of the five top origin markets by the additional IVAs generated over that period, are from that sub-region. The USA makes up the fifth origin market in this group, ranked at number four with an increase of more than 11.5 additional IVAs generated over that period.

These five origin markets collectively, added almost 76 million additional IVAs into Asia Pacific destinations between 2014 and 2018, more than 54% of the net increase in IVAs, over that period.

The AAGRs over that period also show some interesting results, with the Caribbean showing some reasonably strong growth rates, supported by West Asia. Cuba and Qatar are particularly interesting given that they both have a combination of a reasonable volume of IVAs that they generate and a relatively strong AAGR between 2014 and 2018.

Across all the origin and destination pairs in Asia Pacific in 2018, There were wide differences in Annual percentage growth rate sand annual gains in IVAs. The following lists of the top 5 origin-destination pairs highlight this clearly, across both metrics at both the annual (2017 to 2018) level and over the longer-term (2014 to 2018).

Key among these were some interesting pairs that doubled their IVA counts between 2017 and 2018, including Myanmar into Lao PDR with more than a six-fold increase, Chinese Taipei into Chile with annual growth of more than 133% and Cuba into Peru with an annual gain of 131%, among others.

Over the longer period between 2014 and 2018, Venezuela demands attention by appearing as an origin twice in the top 5 pairs by AAGR over that period, once into Peru and once into Chile.

And finally, between 2014 and 2018, the volume increases have been driven very much by North Asia, with some of the Greater China flows in evidence, along with significant increases into Japan out of both China and the Republic of Korea.

PATA CEO Dr. Mario Hardy said, “Data is important, but one should never trust data without first defining the context, evaluating the source and critically examining the data from a number of perspectives. The Annual Tourism Monitor 2019 Early Edition provides immediately relevant and authoritative data to enhance and complement the research and strategy departments of any destination or organisation, and leverage accordingly in order to stay competitive in the evolving travel and tourism landscape.”

About PATA
Founded in 1951, PATA is a not-for-profit membership association that acts as a catalyst for the responsible development of travel and tourism to, from and within the Asia Pacific region. The Association provides aligned advocacy, insightful research and innovative events to its more than 800 member organisations, including 95 government, state and city tourism bodies, 20 international airlines and airports, 102 hospitality organisations and 70 educational institutions, as well as over a hundred young tourism professional (YTP) members across the world. The PATA network also embraces the grassroots activism the PATA Chapters and Student Chapters, who organise numerous travel industry training programmes and business development events across the world. Thousands of travel professionals belong to the 35 local PATA Chapters worldwide, while hundreds of students are members of the 22 PATA Student Chapters globally. The PATAmPOWER platform delivers unrivalled data, forecasts and insights from the PATA Strategic Intelligence Centre to members’ desktops and mobile devices anywhere in the world. PATA’s Head Office has been in Bangkok since 1998. The Association also has official offices or representation in Beijing and London. Visit www.PATA.org.