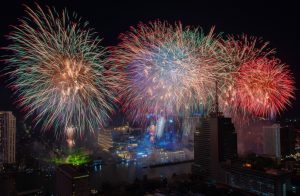 Bangkok (Thailand) – January 2, 2019 (travelindex.com) – The Tourism Authority of Thailand and Iconsiam Co., Ltd. in collaboration with The Iconsiam Residence Corporation Ltd., The Iconsiam Superlux Residence Corporation Ltd., and the largest coalition of public and private sector organisations including Association of Chao Phraya Commerce, Marine Department, Siam Commercial Bank, TRUE Corporation Public Company Limited, Kasikorn Bank, Thai Shipping Association, Bangkok River Partners, and Chao Phraya Riverside Communities have jointly organised the “Amazing Thailand Countdown 2019“, with the longest fireworks display ever staged along Bangkok’s Chao Phraya River in Thailand in which more than a million people expected to view this spectacular displays. Under the theme of “The River of Glory,” the New Year Celebration is a riverside mega phenomenon created by ground-breaking collaboration of Thai people aiming to revitalise Bangkok’s world-renown Chao Phraya River as a national landmark and a global destination. Come observe the longest eco-friendly fireworks display stretching more than 1.4 km ever staged along Bangkok’s Chao Phraya River, appreciate the “Khone” epic masked performance in the grand episode of “Rama Returns to Reign over the City”, enjoy an extensive line-up of cultural performers and top ranked singers from local and international on stage to mark Thailand’s entry into the New Year 2019 at Iconsiam’s riverside ‘River Park’ plaza.

According to Mr. Yuthasak Supasorn, Governor of the Tourism Authority of Thailand (TAT), “Every year we organise extraordinary events to mark the New Year and reinforce Thailand as a great destination for visitors, and this year’s will be a particularly sensational one. This year we’ll organize the event in 5 different provinces: Bangkok, Chiang Rai, Nakhon Phanom, Ratchaburi, and Satun. Together with Iconsiam and the largest coalition of public and private sector organisations, “Amazing Thailand Countdown 2019″ in Bangkok is exceptional in more ways than one. It will take place by the Chao Phraya River right in the heart of Bangkok and bring into light the charm and serenity as well as way of life of the surrounding communities. I think all tourists and visitors shall find their attendance an added-value experience. I am convinced that the Amazing Thailand Countdown 2019 will be a forward step for our country to project the image as a global tourist destination.”

Mrs. Pasinee Limatibul, Chairman of Iconsiam Co., Ltd., adds that “We are honoured to have been selected by TAT and are proud to have organized the “Amazing Thailand Countdown 2019″ with TAT and other largest coalition of public and private partners. I would like to sincerely thank to the fact that all parties have jointly collaborated to create the truly amazing countdown for the night. With confidence that Amazing Thailand Countdown 2019 will be able to glorify the greatness of the Chao Phraya River and also spark the glow of the Chao Phraya River to illuminate the eyes of Thai and foreigners completely.”

Here are the major highlights of the upcoming “Amazing Thailand Countdown 2019” to be witnessed by more than a million people in the proximity of the river and beyond. The fireworks are made from Thai sticky rice and considered an innovation that is eco-friendly. The massive display of fireworks based on the theme of “The River of Glory” demonstrates the history of the Chao Phraya River pertaining to our way of life, tradition, and legends of Siam (now Thailand) as a country. This 5-minute fireworks display will be carried out at five different river curves. It will feature the longest fireworks display stretching of more than 1.4 km long ever staged on the Chao Phraya River. The display consists of 5 Acts.

– The first Act – “The River of Prosperity” is a fireworks display in silver, gold, and bronze colours held together consecutively. Based on the beliefs of people, the three elements symbolize prosperity. As such, the first second of the New Year is to make the Chao Phraya River bright, beautiful, peaceful and prosperous as it has been over the years.

– The second Act – “The Siam Treasure” is a fireworks display of multiple shapes and colours that reflect a close interconnection between our tradition, a way of life and the Chao Phraya River. Not only that the River was essential in daily human activities, it was also what people utilized for transportation, a naval route for diplomatic corps coming in to establish diplomatic relations with Siam, a way to transport products and conduct trade since Ayutthaya period to present, a way to perform religious rites, and an attractive scene that capture imagination of overseas tourists and generate income for our country.

– The third Act – “The Blossom of Joy” is a fireworks display that creates excitement in more ways than one. The display is accompanied by Thai folk songs that reflect our uniqueness as fun-loving, friendly, and smiling people. Any overseas tourist visiting Thailand and attending the event at Iconsiam will become impressed with, for example, reciprocity of Thai people. Such an impression is enough to start a happy New Year by the Chao Phraya River-a bloodline of Thailand.

– The fourth Act – “One World” is a fireworks display that highlights the flags and colours of the nations of the world. It also represents their connectivity through tourism, trade, education, cultural exchange based on equality that will flourish from the start of the New Year and in the years to come.

– The fifth Act – “Thailand” is a fireworks display of the tricolors of Thailand’s national flag along the Chao Phraya River. The tricolors of red, white and blue collectively represent our national identity as an independent country shielded by our solidarity and unity.

In addition, Magnolia Quality Development Corporation Co., Ltd. (MQDC) also created a great phenomenon with the countdown to welcome the New Year on the Chao Phraya River. A spectacular light show of “The New Beginning of 2019” highlighting on the 70-storey Magnolias Waterfront Residences at Iconsiam and the 52-storey The Residences at Mandarin Oriental, Bangkok, both with unparalleled views out onto the Bangkok skyline and beyond is like the first light of the year 2019 that reflects the glory of Thailand, the beauty of the river current, and the unity of the Thai nation through the colours of light and the lines of the buildings.

Furthermore, there will be a “Khone” masked performance of “Rama Returns to Reign over the City” grand episode. As part of the New Year Celebration 2019, the “Khone” masked performance is in honour of it being listed by UNESCO as the Intangible Cultural Heritage of Humanity. This traditional masked performance use traditional costumes that are elaborate and elegant, and worth of several million baht, while the makeup is undertaken by Ajarn Peeramon Chomdhavat and Ajarn Surat Jongda both of whom are seasoned and experienced Khone specialists for more than 25 years.

The “Rama Returns to Reign over the City” episode is a story of the victory of “Rama” or “Phra Ram” over Tossakan and his giant army in a long-fought war. As peace had finally returned to the Ayutthaya Kingdom, the people and the army pleaded Rama to return to the throne as their king once again. Joy prevailed throughout the land and the heavens. People and angels were engaged in dancing, the most notable traditional dance of all was U-thong Dance, and celebrating the return of their King.

In addition, leading 21 Thai and overseas artists will be on stage to perform on the New Year eve to keep our local and foreign tourists fully entertained. Among well-known artists who will be there included AF & The Voice artists – Ton Thanasit, Aim Satida and Boat Siriroj, Oh Sipoom and Ice Thamolwan and from The Star artists – Hun Isariya, Kangsom Tanatat, Gam Wichayanee and Kan Napat including the performance from EXACT actors – Film Thanapat, Bright Norapat, Tong Tong Wuttipat, Kang Vorakorn, Rith Ruangrit, Chen Ratchpong, Frank Chatchai, famous actor from Channel 3 Great Varitorn, together with talented nine-year-old Thai musician Gail Sophicha, famous Taiwanese pop singer Janice YAN, and the winner of the first season of “The Voice Thailand” as well as the fourth season of “The Mask Singer” Nont Tanont, and dancing queen of Thailand Christina Aguilar.

The Amazing Thailand Countdown 2019 being staged at Iconsiam’s riverside ‘River Park’ plaza is a truly once-in-a-lifetime experience you will never forget.