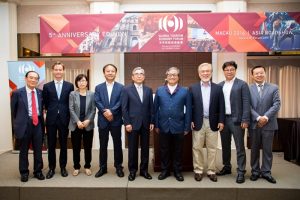 Macau (Macau SAR) – September 12, 2016 (travelindex.com) – The Global Tourism Economy Forum (“GTEF” or “the Forum”) officially introduced its well-reputed international platform to the tourism and business communities of Korea for the first time on August 11, 2016, and rounded up its remarkably well-received five-city Asia roadshow at Seoul today.

Scheduled to be held at Studio City Macau, the city’s newest iconic Hollywood themed landmark, from 15 to 16 October 2016, this special fifth anniversary edition will be dedicated to “The Growing Consumer Class, Rethinking and Reshaping the Future Tourism Landscape”. GTEF 2016 will zero in on how this rising independent-minded, resourceful and tech-savvy group is more than ever the increasingly influential force in the tourism industry through thought provoking discussion of issues related to Chinese consumers, tourism and technology, urban tourism consumption revolution, the millennial travelers and tourism investment.

With its active participation in multilateral collaboration such as Meeting of the ASEAN, China, Japan and Korea Tourism Ministers (M-ATM+3), as well as a long history of Sino-Korean tourism cooperation at various levels, Korea has been an innovative leader in creating synergy between tourism and the creative industries. Korea’s popular culture is among the key factors redefining the consumption pattern of international travelers nowadays, providing invaluable reference for the global tourism industry to reassess the attributes that can catalyze the sustainable economic growth.

Mr. Peter Wong believes the Asia roadshow has essentially elevated the brand awareness of GTEF across Asia. He commented, “Considering South Korea has one of the world’s most vibrant consumer economy, the insightful exchange on the consumer market between GTEF and its Korean tourism peers is especially beneficial with regard to enriching the content of our special fifth anniversary edition. We are delighted to see the sincere interest expressed by the Korean tourism and business communities in exploring new business opportunities and partners at the Forum, and we stand ready to offer them these opportunities.”

GTEF 2016 Asia Roadshow kicked off at Beijing on July 28, had since travelled to Shanghai (August 1), Taipei (August 5) and Guangzhou (August 9), and has made Seoul the final stop. Having connected over 230 industry leaders through networking settings like luncheons and salon, the roadshow has received tremendous support from local organizations and associations, strengthened mutual understanding with nationwide and overseas tourism peers, and explored collaboration possibilities with the local tourism sector.

Ensuring Freshness of Seafood at The Dock by Thammachart Seafood

PATA Destination Marketing Forum 2019 to be Held in Pattaya