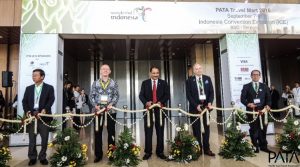 Addressing a media briefing at the Indonesia Convention Exhibition (ICE) later that morning, Mr Jones stated that the Association had previously organised four successful events in Indonesia, in Jakarta (1991) and in Bali (1985, 1989 and 2007).

He noted that, “It is one of the reasons why PATA is committed to providing opportunities and activities to help support and nurture the growth and development of travel and tourism in this country. It is also the reason why we are excited to facilitate engagement between Indonesia and the rest of the world through the Mart. It is a relationship that best highlights the activities of PATA and the unlimited potential for growth of Indonesia.”

PATA CEO Dr Mario Hardy used the opportunity during the morning media briefing session to thank President University for hosting the PATA Youth Symposium to be held later that day. The event, organised by the Association’s Human Capital Development team with the theme ‘Young Entrepreneurs Role in Tourism’s Future’, attracted over 190 young professionals.

Dr Hardy also praised Phocuswright, a PATA Preferred Partner, for co-organising the PATA Travel Innovation Forum along with Connecting Travel as well as the Professional Travel Bloggers Association for co-organising the Blogger Marketing Forum, which both took place on Wednesday, September 7. Both forums allowed delegates to gain the latest trends and insights into the travel and tourism industry. Presentations from both forums are available at www.PATA.org/ptm-2016.

About PATA
Founded in 1951, the Pacific Asia Travel Association (PATA) is a not-for profit association that is internationally acclaimed for acting as a catalyst for the responsible development of travel and tourism to, from and within the Asia Pacific region. The Association provides aligned advocacy, insightful research and innovative events to its member organisations, comprising 95 government, state and city tourism bodies, 27 international airlines, airports and cruise lines, 68 educational institutions, and hundreds of travel industry companies in Asia Pacific and beyond. Thousands of travel professionals belong to the 40 local PATA chapters worldwide. The chapters organise travel industry training and business development events. Their grassroots activism underpins PATA’s membership of the Global Travel Association Coalition (GTAC), which includes ACI, CLIA, IATA, ICAO, WEF, UNWTO and the WTTC. The PATAmPOWER platform delivers unrivalled data, forecasts and insights from the PATA Strategic Intelligence Centre to members’ desktops and mobile devices anywhere in the world. PATA’s Head Office has been in Bangkok since 1998. The Association also has official offices or representation in Beijing, Sydney and London.