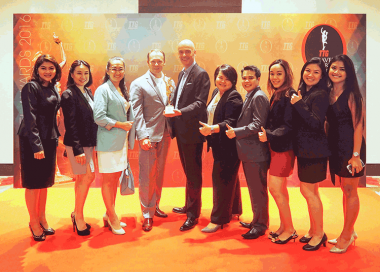 Bangkok (Thailand – October 3, 2016 – (travelindex.com) – Best Western Hotels & Resorts has been named as Asia’s Best Mid-Range Hotel Brand for an incredible tenth year in a row!
The iconic hotel group, which is celebrating its 70th anniversary this year, once again took home the title of ‘Best Mid-Range Hotel Brand’ in the 27th Annual TTG Travel Awards 2016. The winners were voted for by the readers of TTG Asia, the region’s leading travel trade magazine.

Olivier Berrivin, Best Western’s Managing Director of International Operations – Asia, said he was delighted with the award, which demonstrates the enduring appeal of Best Western.
“We are absolutely thrilled to have been honored once again at the TTG Awards,” said Mr. Berrivin. “To be named as Asia’s ‘Best Mid-Range Hotel Brand’ not just once, but for ten years in a row, is a truly staggering achievement for Best Western and one that we are extremely proud of.”

“It is also a wonderful testament to our entire Asia-based team, both at our Bangkok head office and all our hotels. To maintain such consistently high standards is an amazing achievement, and reflects their tremendous hard work and professionalism.”

As it celebrates its 70th anniversary and its 15th year in Asia, Best Western is currently undertaking an historic period of development. The company recently unveiled its new global branding and launched four new hotel concepts, including the ultra-modern Vīb® and GLō℠. Asia’s first ever Vīb hotels are due to open in Bangkok, Yangon and Vientiane in 2018.
“This award shows is that the Asian travel trade is embracing the changes we are making, whilst also recognizing our continued leadership in the midscale sector. This is really wonderful to see.” Mr. Berrivin concluded.

Best Western was presented with the award in a glittering ceremony in Bangkok, attended by many leading figures from the Asian travel trade.

About Best Western Hotels & Resorts:
Best Western® Hotels & Resorts headquartered in Phoenix, Ariz., is a privately held hotel brand with a global network of 4,100* hotels in more than 100* countries and territories worldwide. Best Western offers seven hotel brands to suit the needs of developers and guests in every market: Best Western®, Best Western Plus®, Best Western Premier®, Executive Residency by Best Western℠, Vīb®, BW Premier Collection® and GLōSM. Now celebrating 70 years of hospitality, Best Western provides its hoteliers with global operational, sales and marketing support, and online and mobile booking capabilities. More than 26 million travelers are members of the brand’s award-winning loyalty program Best Western Rewards®, one of the few programs in which members earn points that never expire and can be redeemed at any Best Western hotel worldwide. The brand’s partnerships with AAA/CAA, Minor League Baseball, and Harley-Davidson® provide travelers with exciting ways to interact with the brand. Best Western continues to set industry records regarding awards and accolades, including Business Travel News naming Best Western as the best midscale hotel brand in 2014 and Best Western Plus as the best upper mid-price hotel brand in 2014 and 2015, four consecutive Compuware Best of the Web gold awards for best hotel website, and seven consecutive AAA/CAA Hotel Partner of the Year awards. Nearly 60 percent of Best Western branded hotels earned a TripAdvisor Certificate of Excellence award in 2015.
* Numbers are approximate, may fluctuate, and include hotels currently in the development pipeline.

UNWTO Awards Celebrate the Best in Accessible and Sustainable Tourism