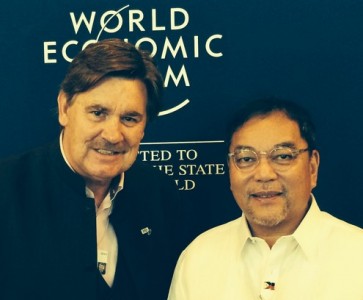 Manila (Philippines) – May 23, 2014 – H.E. Ramon R. Jimenez Jr., the Secretary of Tourism of the Philippines passed on his sincere thanks on the sidelines of the World Economic Forum (WEF) to Pacific Asia Travel Association (PATA) members who extended help in the six months since Typhoon Yolanda “hit hard” 44 of the country’s 81 provinces.

Secretary Jimenez was congratulated in a key note speech at the World Economic Forum this afternoon at the Makati Shangri-La by President of the Philippines Benigno S. Aquino for his outstanding delivery of the “More Fun in the Philippines” promotional campaign and the doubling of the year-on-year international visitor arrivals to 11.3%.

Secretary Jimenez, who on May 18, 2014 in Zhuhai was voted on to the PATA Executive Board, has already hosted three major conferences this week in Legaspi for ASEAN and UNWTO. PATA was pleased to speak on Monday, May at the UNWTO/ASEAN on “Tourism and Climate Change”. Details of the event and the full speech content and visuals can be found on the PATA website.

PATA CEO Martin Craigs who is in Manila as a guest of Global Tourism Association Coalition (GTAC) partner WEF has today confirmed that Secretary Jimenez will visit Bangkok from July 4-5 to attend his first PATA Executive Board meeting and speak to the PATA Thailand Chapter and industry friends to show solidarity in challenging times.

“Secretary Jimenez is an outstanding next generation minded tourism leader with a natural sense of reciprocity, it will be a pleasure to host him in Thailand,” Mr Craigs concluded.

Also of note and recorded with pride is the progress PATA activists have made in the rebuilding process since the Bohol Earthquake and Typhoon Haiyan/Yolanda hit in 2013.

In March 2014, government and tourism industry stakeholders gathered in the Philippines to draft a Tourism Recovery and Rebuilding Plan for the Philippines. This followed PATAs fast track fundraising and disaster supply delivery in December, which was very effectively promoted by media partners Time /CNN.

The March consultation was led by the Philippine Department of Tourism in partnership with the United States Agency for International Development (USAID) through its Advancing Philippine Competitiveness (COMPETE) project, the United Nations World Tourism Organization (UNWTO) and PATA HQ and Chapter.

At the invitation of the Philippine Department of Tourism and USAID, PATA and the UNWTO each nominated and sent a tourism expert to serve as resource person to form an international team to develop a tourism marketing recovery strategy following the October 2013 Bohol earthquake and November 2013 Typhoon Haiyan (Yolanda), which caused catastrophic destruction in the Eastern Visayas of the Philippines.

PATA representative Ian Cameron, principal consultant with Ian Cameron Associates from Australia and UNWTO consultant Hans Carl Jacobsen undertook two missions. The first was from February 24 to March 12 with the objective of fact finding on the affected areas. The second mission was from March 24 to April 4 and involved insightful discussions with key industry stakeholders and the development of a strategy.

Based on the two mission trips, Bohol was promoted as an eco-cultural destination with its pristine white sand beaches, world class diving sites, centuries old churches and heritage villages. The province is also gifted with unique natural treasures such as the Chocolate Hills, a geological formation comprising over a thousand distinct hills; and the Tarsier, the smallest and oldest primate in the world.

PATA CEO Martin Craigs said: “Our partnership with the Philippines is a long and close one, PATA was delighted to nominate an expert to help the country’s tourism sector bounce back from natural disasters.”

Assistant Secretary Rolando Canizal of the Department of Tourism lauded the support extended by PATA to hasten the recovery process for Bohol and looks forward to greater collaboration in the implementation of the marketing and communications programs cited by Ian Cameron.

Dr. Enrico L. Basilio, Chief of Party of the USAID’s Advancing Philippine Competitiveness (COMPETE) Project being implemented by The Asia Foundation, said the partnership is very timely and will boost Bohol’s positioning in the international market.

“This is a great opportunity for Bohol to get exposure from PATA-member countries.” Basilio added.

As part of the need for better engagement with tour operators, wholesalers and airlines, a large delegation from Bohol tourism will attend the PATA Travel Mart to be held in Cambodia, September 17 to 19, 2014.

The strategy was subsequently submitted to the Secretary, Ramon R Jimenez Jr. for endorsement .

They will both be available from 16.30 on Friday 22nd May in the Lobby Lounge of the Makati Shangri-La for questions, please call PATAs Liaison officer for the Philippines Ms Aubrey Guinto at Aubrey@PATA.org or on (63) 905 207 4474 for more specific information on the media briefing.

About PATA
Founded in 1951, the Pacific Asia Travel Association (PATA), is a not-for profit association that is internationally acclaimed for acting as a catalyst for the responsible development of travel and tourism to, from and within the Asia Pacific region.

The PATAmPOWER platform delivers unrivalled data, forecasts and insights from the PATA Strategic Intelligence Centre to members’ desktops and mobile devices anywhere in the world. PATA’s Head Office has been in Bangkok since 1998. The Association also has official offices or representation in Beijing, Sydney, Dubai, London and New York.

UNWTO Condemns the Attack in Manila

The Philippines to Showcase its Golf Courses to a Worldwide Audience